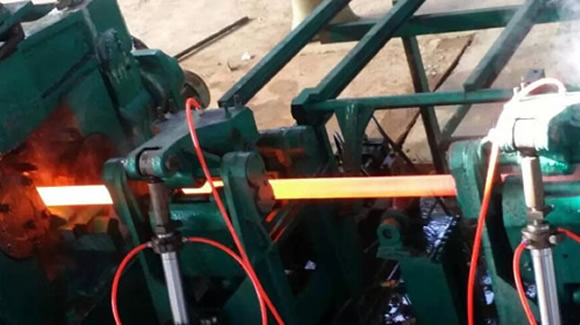 The cracks of pipeline weld often follow different mechanisms, which can be divided into two types: hot cracking and cold cracking. It is produced by the thermal cracking of molten metal into solid crystallization, which is mainly produced in weld metal. The main reason for the low melting point material is that it exists in the weld, which weakens the contact between the grains when the high welding stress is accepted, and it is easy to lead to the breakdown between the grains. Hot spots are easy to occur when electrodes and electrodes contain impurities such as S and Cu for a long time.


The distribution of thermal cracks along the grain boundary. This is an obvious trend of hydrogenation when passing through surface and external cracks. After welding, the cooling process will produce cold cracks, mainly arising from the base metal or base metal and weld fusion line. The main reason is that because of its production or in the heat affected zone formed in the quenching structure, under high stress, the grain rupture, the higher the carbon content of the welding element, or the more easily hardened alloy steel, is the most likely to occur cold cracking. Too much hydrogen will melt into hydrogen, causing cold cracks. Defect is the most dangerous crack. In addition to reducing the cross section than the bearing, it will also produce a serious crack stress concentration, which will gradually expand in use, and may eventually lead to damage to the component. Therefore, welding structure is generally not allowed to exist. This defect is found to be a re welded shovel.


Defects in the weld defects of the steel pipe are defects that are not fully fused between the workpiece and the weld metal or partial weld. Incomplete penetration welds weaken the section of the workpiece, cause serious stress concentration and greatly reduce the connection strength, so it is often the source of weld cracks. The slag is filled with non-metallic slag, that is, slag. Welding slag reduces working cross section, resulting in stress concentration which will reduce welding strength and toughness.


The porosity of the weld metal at high temperature, due to the excessive gas or gas dissolved in the electrolytic cell, is caused by the metallurgical reaction, which is cooled and solidified too late when the electrolyzer is discharged and the pores are formed inside or on the surface, that is, the pores. The existence of the hole reduces the effective work of the welding cross section, thereby reducing the mechanical strength of the joint. If there is perforation or continuity, it will seriously affect the sealing performance of weldments. When welding or welding metal, cracks appear at the welded joints, and the area of local rupture is called crack. Cracks may occur in the weld and may also occur in the heat affected zone on both sides of the weld. Sometimes it happens on the surface of the metal, and metals may be generated internally.